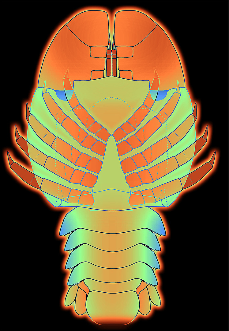 At the end of the year, three new articles from our team got published, all with the aid of our students and all in Palaeodiversity. One of them even made it onto the cover page:

The fossil investigated in this study, a ca. 50 million years old slipper lobster, was documented with up-to-date documentation methods. In this way, we were able to reveal different morphological details, which have not been available for the original description. Especially ventral details as, for example, those of the legs or the sternum became discernible by applying macro-autofluorescence. The overall morphology argues for the specimen representing a last larval stage, a so-called nisto. With this, it would be just the second nisto in the fossil record. The article is freely available and can be downloaded here.

In a second paper we present new data on fossil mantis shrimp larvae:

In the last few years we have already described different types of mantis shrimp larvae from the Solnhofen limestones. The first of these larvae did not receive any name at that time, as we had only very little data based on a single specimen. Now we reinvestigated the original specimen and could also study an additional one. Based on these new data, we could describe the larvae as a new species, Gigantosculda ehrlichfeckei. Additionally, we could also describe new details the feeding and raptorial apparatus of larvae of another species, Spinosculda ehrlichi. Based on these character, we were able to reconstruct parts of the life habits of this species and aspects of the evolution of mantis shrimps from the Jurassic until today. The freely available paper can be found here.

In the third article we describe a new species of a fossil roach-like insect:

The new species, Raptoblatta waddingtonae, originates from the 115 million years old Crato formation in Brazil. The fossil shows a general cockroach-like habitus, but additionally possesses a pair of raptorial appendages morphologically similar to those of modern praying mantises. The details of the raptorial appendage morphology point to a sister group relationship of the newly described species with praying mantises. The paper can be freely downloaded here.

These three publications represent each the first publication of one of our current or past team members Nicole Rudolf, Joris Wiethase and Isabel Dittmann. We are very happy about this, congratulations!

Hatchling of a fossil archaeognathan

Recently, our paper on a possible hatchling of a fossil jumping bristletail (Archaeognatha) was published:

The specimen is preserved in Baltic amber, about 50 million years old. It is less than 5 mm long (without the terminal filament), its appendages are fairly stout, and appears in total to be at a rather early stage, possibly a first post-embryonic stage (hatchling). With this, our discovery would be the oldest fossil find of such an early developmental stage of an “apterygote” insect.

The specimen was documented during a visit to the Zoological Museum Copenhagen by our PhD student Marie Hörnig. The trip was kindly funded by the Synthesys project of the EU. The paper can be accessed here.

Only a few days ago, another paper of our team was published, this time a technical paper:

In this study, we compared different imaging methods for documenting paralarvae, the early developmental stages of many cephalopods (e.g., squids, cuttlefish, octopuses). In most studies published on paralarvae so far mainly line drawings have been presented. However, high-resolution photographs of the specimens provide a much more objective basis for detailed morphological investigations.

Our comparison of different documentation methods led to the result that autofluorescence microscopy is an optimal approach for this kind of specimens. Under different excitation wavelengths even different types of structures become visible, partly also internal structures such as the gladius. As the documentation can be performed within the storage liquid, also museum specimens can be documented without any special treatment such as drying.

This study has been kindly funded by Lehre@LMU with a grant to our student Michael Metz. Congratulations to his first publication! The paper is open access and can be downloaded here.

We would like to announce the appearance of our paper on the oldest fossil holometabolan insect larva:

In this article, we describe the morphology of Srokalarva berthei in detail. The single specimen stems from the more than 300 million years old Mazon Creek deposits (Illinois, USA). As it has repeatedly been questioned that Srokalarva berthei is really a holometabolan insect larva, we decided to re-investigate the specimen. For this purpose, we applied several different imaging techniques, especially undirected vs. directed light, in comparison with stereo photographs. In this way, we could identify which structures are really original structures of the animal and which ones are just artefacts produced by uneven surface of the stone.

Based on these investigations, we produced a new reconstruction of Srokalarva berthei. Compared with the original reconstruction, there are in fact less details recognisable, while several of the originally described structures are most likely artefacts caused by low angle light. Especially the head and thorax region, as well as the abdominal appendages differ significantly from the original description. We put our results in an evolutionary developmental context and tried to draw conclusions about the possible life habits of this animal. The paper is freely accessible and can be downloaded here.

Additionally, our chapter about comparative aspects in crustacean larval development got published:

Here we tried to identify the evolution of developmental patterns from the earliest crustaceans into the different modern groups. Several of these modifications can probably be explained by shifts in developmental timing, so called heterochronic events. The chapter is part of a book project on evo-devo of invertebrates edited by Andreas Wanninger from the University of Vienna. With its six volumes it is really a comprehensive piece of work, which we are happy to be a part of! The book can be found here. 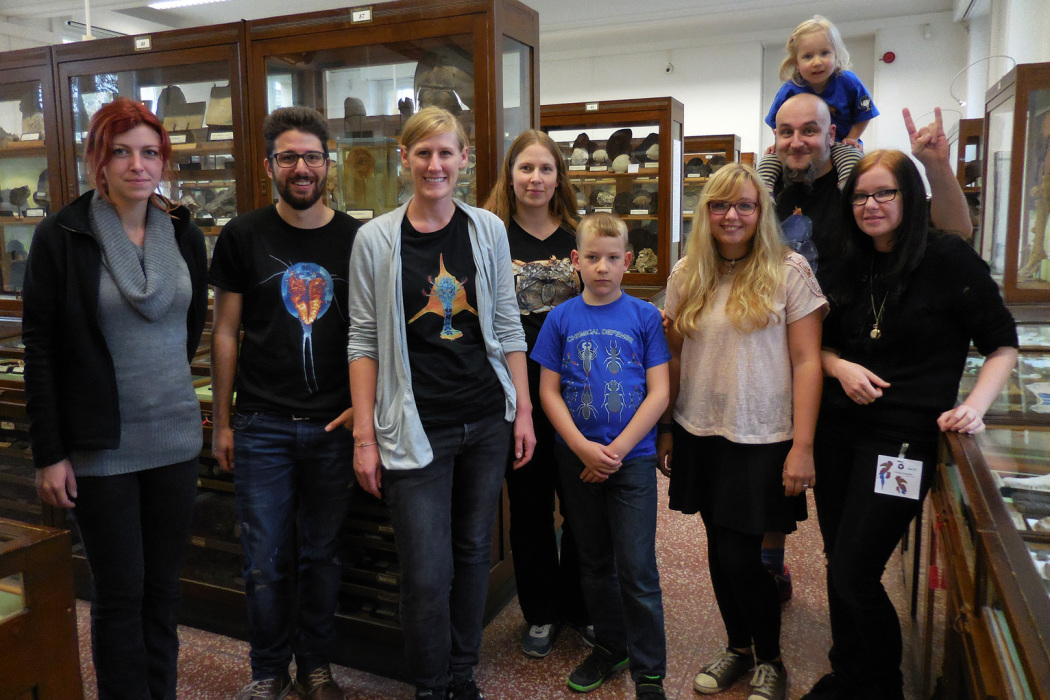 Furthermore, we were really busy in the last months. Several of our students finished their theses, so we will have some restructuring on the team page in the next time. We were also traveling a lot, to Paris for a collection visit (Synthesys grant), to Graz for the annual meeting of the German Zoological Society (DZG), and to Bonn for the palaeoentomologists' meeting. Several team members gave talks and presented posters on these meetings, leading to a 3rd place in the poster contest for Marie Hörnig and a special prize by Springer for the poster of Gideon, both in Graz. Congratulations to both, and many thanks to our ambitious students! 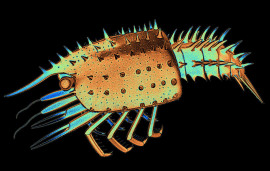 Fossil larva of a polychelid crustacean

After quite some time 'in press' our new paper is finally published:

We describe the first possible record of fossil polychelidan larvae. Modern polychelidan lobsters are deep-sea inhabitants (partly depending how deep deep-sea is). Many species are known to develop through a long series of larval stages; the older larval stages reach astonishing sizes of several centimeters. To still maintain a pelagic life style, these larvae have special morphological adaptations that increase their buoyancy. Among these are pronounced spines on shield and pleon, as well as a strongly inflated shield.

Mesozoic polchelidans were quite abundant and species-rich. Mesozoic forms known so far did not develop through specialised giant larvae. They reached a juvenile/adult morphology at quite small sizes, hence changed to a benthic life habit comparably earlier.

The new fossils appear to be larval stages of a polchelidan lobster. They are about 90 million years old. Different from modern polychelidan larvae, they do not have strongly inflated shields. Yet, like in modern forms the shield and pleon bear prominent spines. These fossil larvae are also already moderately large. Hence, they already exhibit some adaptations to a prolonged life in the pelagic realm. This is another case in which fossils facilitate the reconstruction of a stepwise character evolution to highly specialised modern larval types. The publication can be found here.

Furthermore, Carolin was awarded the BioNa Junior Scientist Award of the LMU Munich (10,000 Euro). Also her scholarship has been prolonged. Congratulations!

End of March we and part of our team took part in the German Crustaceologists' meeting (short: CrustTag) in Bremerhaven. As our team members are very ambitious, we contributed in total 3 talks and 9 posters to the meeting! 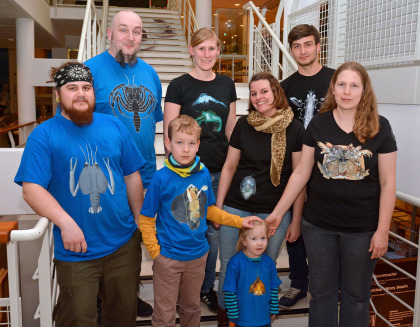 With these contributions, we covered almost the entire spectrum of crustacean research, from decapods over stomatopods to diverse parasitic representatives and Triops cancriformis, which is said to exist unmodified since millions of years. As traditionally the CrustTag also includes marine chelicerates, our team also reported about the development of the xiphosuran Limulus polyphemus and about the evolution of the feeding apparatus in chelicerates. 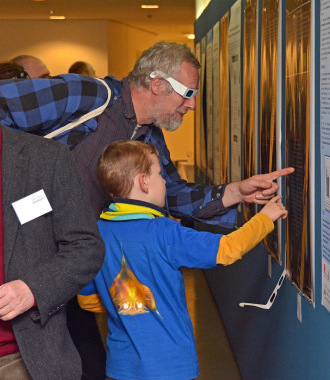 The feedback to our contributions was entirely positive, we got a lot of questions and had interesting discussions. To top it all: Our team could take home two awards! Our PhD student Christina Nagler won the 1st award for oral presentation, and our son Gideon received the 3rd poster award. Again, congratulations to both! 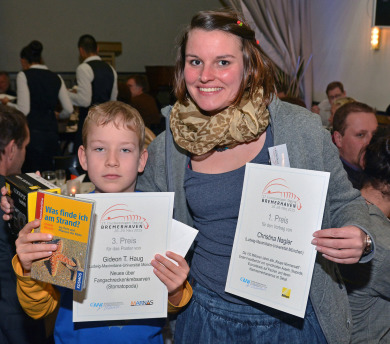 Many thanks to Oliver Mengedoht from Panzerwelten.de for the excellent photos!

Our article on the oldest crab larva was just published: 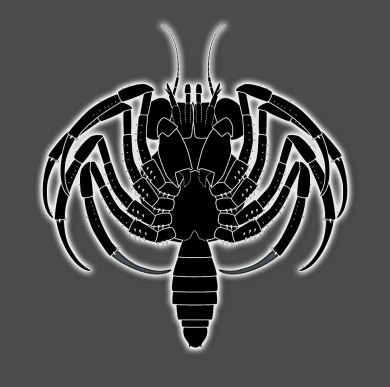 While adults of true crabs (Brachyura) are comparably common in the fossil record, up to now only one finding of fossil crab larvae has been reported. However, the discovery of a private fossil collector, Roger Frattigiani, has changed this now. His finding from the Solnhofen Lithographic Limestones with an age of 150 million years represents not only the oldest fossil crab larva known to date, but also the first completely preserved one. Furthermore, this fossil represents a megalopa, which is the later larval stage of brachyurans. Up to now, only earlier, so-called zoea larvae have been found.

Interestingly, the newly described fossil crab larva is so modern in its morphology that an acription to several brachyuran groups living today would well be possible. This being already astonishing for such an old finding, additionally the adult representatives of true crabs at that time had still a very ancestral morphology. Accordingly, the evolutionary changes of the larvae were obviously already ahead of those of the adults. The article can be found here. 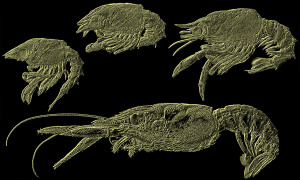 Larvae of the European lobster

Recently, our student Marie Rötzer published her first paper on the larval development of the European lobster:

Rötzer, A. I. N. & Haug, J. T. 2015. Larval development of the European lobster and how small heterochronic shifts lead to a more pronounced metamorphosis. International Journal of Zoology, art 345172.

Our new investigations show that this change in H. gammarus is less drastic, or less “metamorphic”. Therefore, we assume that a change in morphology in larval stage 3 of H. americanus was already sufficient to develop a metamorphosis in this species. This means that metamorphosis can evolve by changing only one developmental stage, which is a fairly small change compared to other options such as a complete loss of one stage. The paper is freely available and can be found here.