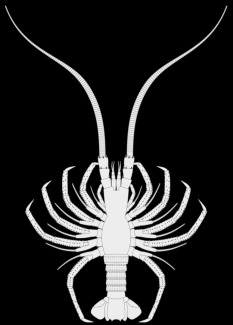 We just published two articles in a special issue of Arthropod Structure & Development, entitled “Fossils as Living Beings”. Both deal with the development of fossil achelatan lobsters and the evolutionary implications.

In the first paper, we present the ontogeny of tenera Oppel, 1862 from the 150 million years old limestones of southern Germany:

The specimens of tenera Oppel, 1862 obviously all represent immature individuals, and the corresponding adult is not known yet. Originally, this species has been described as Palinurina tenera. However, it is not clear if this species and the only other species of Palinurina, P. longipes, are sister species as a proper comparison is not possible as there are no corresponding developmental stages. Therefore, we prefer to use either tenera Oppel, 1862 as a neutral species name or Achelata tenera (an approach suggested by other authors) as the species is for sure an achelatan lobster. Most of the material was kindly provided by private collectors; hence the study emphasises again the importance of hobby palaeontology. The paper was published here.

In the second article, we use fossil developmental data to elucidate the evolution of slipper lobsters:

Modern slipper lobsters have a characteristic shovel-like antenna. This special shape has evolved from an originally elongate antenna as that of spiny lobsters. We investigated different fossils from the Cretaceous limestones of Lebanon and compared them with other fossil as well as extant species, also including different developmental stages. With this, we were able to reconstruct the stepwise evolution of the shovel-shaped antenna of modern slipper lobsters. The article is available here.

Additionally, we are happy to announce that Carolin got her project proposal granted by the German Research Foundation (DFG). She will now be funded for investigating body organisation in chelicerates for 3 years.

Recently, two articles of our PhD students Marie Hörnig and Christina Nagler were published. Both papers deal with arthropods in amber.

The article of Marie is about brood care in the fossil record:

In the here presented piece of amber, probably Baltic Amber and thus 40–50 million years old, 13 cockroach nymphs are enclosed. With a combination of different imaging methods we could show the morphological details in three dimensions. In this way, it became clear that the nymphs all have the same size and show different characters of freshly hatched cockroaches, for example, a lack of pigmentation. Furthermore, we found indications that the parents probably also took care of these nymphs after hatching. Characters pointing to such a brood care behaviour are the missing eyes and the still underdeveloped antennae in the nymphs, which means that these animals were probably not developed far enough yet to survive on their own. The paper is freely available and can be found here.

Christina describes in her article the first fossil report of larvae of parasitic isopods:

This study was possible through a collaboration with colleagues from Mexico led by Francisco Vega, with whom we already published project results successfully in the past. Again many thanks for the possibility to collaborate on this project! All investigated amber pieces stem from Chiapas in Mexico and are thus ca. 23 million years old. Enclosed in the amber were 7 specimens of very small, just about 450 µm to ca. 700 µm long,so-called Cryptoniscus larvae. These represent the later larval stage of certain parasitic isopods (Epicaridea). With this, our find is also the first fossil record of larvae of peracarid crustaceans as well as of body fossils of the isopod group Epicaridea; of the latter only the typical swellings induced by the adults on the host animals were known so far. The paper can be found here.