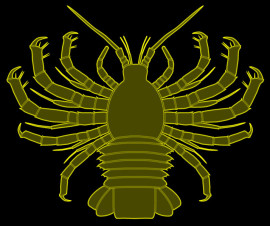 We re-describe a 90 million years old crustacean specimen from the lithographic limestones of Lebanon. The specimen was originally interpreted as a polychelid lobster. We had already suggested previously that the specimen is more likely a representative of achelatan lobsters (Haug et al. 2009; Haug et al. 2011). Our re-investigation clearly demonstrates that the specimen is indeed an achelatan lobster, now named Polzicaris sahelalmae (in honor of Hermann Polz), but additionally represents a specific immature stage.

The specimen possesses a unique mixture of typical larval and juvenile characters. Such a mixture of developmental characters is unknown in modern achelatan lobsters (spiny lobsters and slipper lobsters), but has been just recently reported by us from a Jurassic form from the lithographic limestones of the Solnhofen area (Haug & Haug 2013). Yet, the specimen from Lebanon differs in the combination of the specific larval and juvenile characters from the one previously described. A literature review reveals that comparable forms of achelatan specimens with mixed larval and juvenile characters have been described before from both Lagerstätten, without being recognised as such. All of these forms show different mixtures of characters. This shows that in Mesozoic times we had a rather wide diversity of larval forms and developmental patterns, while in the modern fauna only one stereotypic pattern is known. The paper is available here.

Furthermore, two other palaeo-evo-devo papers were recently published with our contribution. The first one is:

The paper deals with more theoretical aspects of palaeo-evo-devo, with examples from various animal groups, and can be found here. The second paper is:

Here we describe cases of two arthropod species from the famous Cambrian Burgess Shale Lagerstätte in which the animals performed synchronised moulting. In other words, they coordinated their growth. We discuss a scenario for interpreting these finds. This article is open access and can be downloaded here.

Lithobiid nymph in amber (with kind permission of the GfBS)

In this paper, we describe a nymph of a lithobiid centipede (also called common centipedes), enclosed in a piece of Baltic amber. We could identify the specimen as nymphal stage, as it possesses fewer elements on the antennae (better antennules) than adult representatives and also fewer body segments. It probably represents a fourth post-embryonic stage. Unfortunately, an assignment to a specific species is hampered by two aspects. First, assigning sub-adult stages to specific species is already difficult in extant arthropods, but more so in fossils. Second, the taxonomy of lithobiid centipedes in amber is in need of revision.

Additionally, we present a new method to document amber fossils (as the title already says). We used a regular compound light microscope, but used external fiber light sources instead of the internal light source of the microscope. To get rid of reflections, we equipped the light sources with polarisation filters and positioned the polarisation plane rectangular to the plane of the polarisation filter already incorporated in the microscope. In this way, we could record cross-polarised light images. Furthermore, we took image stacks instead of single images to record the three-dimensional information of the specimen. From these stacks, we calculated stereo images. We hope that this approach will be widely applied to amber fossils as it allows to document also tiny structures. The article can be found here.﻿ 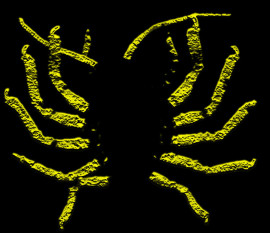 Our new paper on Solnhofen crustaceans was recently published in Bulletin of Geosciences: ﻿

We describe in there two exceptionally preserved fossil specimens from the Solnhofen Lithographic Limestones that were handed over to us by Hermann Polz (many thanks!). The two specimens appear to belong to the same species, representing two successive instars of a decapod crustacean. Five pairs of robust legs with six elements with a simple distal end – no chela – indicate affinities to achelate lobsters.

Achelate lobsters (mainly known as spiny lobsters and slipper lobsters) have a highly specialised type of larva, the phyllosoma. These giant but fragile appearing creatures have elongate slender legs (such larvae have also been repetitively been found in the Solnhofen limestones, some in quantities of thousands, and were worked up by Hermann Polz in a series of papers). The metamorphosis (rapid and drastic change during development) from this specialised larva into the next phase has been described as the most drastic metamorphosis among crustaceans.

An intriguing feature of the two specimens described in our new paper is that the smaller specimen possesses outer rami (exopods) on its robust legs. This feature (and others) indicate a larval status of the new specimens, while the robustness of the legs is only found in post-larval phase individuals of modern achelate lobsters. With this, the specimens possess a mixture of features of the larval and of the post-larval phase.

This indicates that a Jurassic species of achelate lobsters developed in a less metamorphic ontogenetic pattern than any modern achelate lobster. Therefore, we discuss possible scenarios for the evolution of metamorphosis, also briefly discussing examples from other groups such as stomatopods or insects.

We hope that some of you are interested in the aspect of how fossils can tell us something about the evolution of metamorphosis. We furthermore hope that these ideas stimulate further discussions. The paper is Open Access and can be found here.